Has anyone ever lived on the Mall?

The area now known as the Mall has been a place of human activity for thousands of years. Remnants of 10,000-year old Paleo-Indian tools and weapons were discovered on the White House grounds in the 1970s. Before the American Revolution, the area was home to Native American tribes and then a growing population of European settlers. After the federal government moved to Washington, the Mall became the home of the President and his household. In the 1800s, it was also home to the first Secretary of the Smithsonian and a working-class neighborhood near the Capitol.

Has anyone ever lived on Mall?

In the early 1600s, the area which is now the Mall was the home of the Nacotchtanks. The tribe established one of the largest-known trading centers for middle Atlantic Native American tribes south of the Anacostia River. Archaeologists and historians estimate that only about 80 tribe members lived on the Mall's area. By the American Revolution (1775-1783), most of the Nacotchtanks had left the area, driven away by conflict with Europeans and northern tribes, or from diseases carried by Europeans. 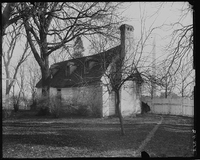 By the 1790s, a small number of white descendants of European settlers owned the area around the Mall. The largest land holdings were those of David Burnes, Daniel Carroll of Duddington, and Notley Young. All of these men owned slaves who lived and worked on their land. This image shows Burnes's cottage, which stood just off today's Mall. In the 1820s, his daughter and her husband built a mansion on the same site.

Since Thomas Jefferson took office and moved into the White House in 1801, presidents and their households have resided in the northern end of the Mall. Presidential households in the early 1800s, included family members, paid staff, and enslaved people. Paul Jennings, pictured here, was owned by President Madison's family. Jennings moved to the White House in 1809 from Orange County, Virginia when he was 10 years old. In August 1814, he and the entire staff rescued goods from the White House before the British attacked and burned Washington. 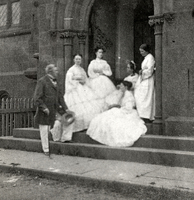 Joseph Henry, the first Secretary of the Smithsonian, lived with his family for 23 years in the Institution's original building known today as the Castle. The Henrys moved into an apartment on the second floor of the east wing with their 4 children, aged 14 to 22. The family left Washington's heat in summers, but spent winters in the Castle. This photograph shows Secretary Henry, his 3 daughters, wife, and an unidentified woman at the east door of the Castle in 1862. Mary Henry, the eldest daughter, kept a diary which recorded her experiences during the Civil War as seen from the Castle.

From the 1840s until the 1930s, the area where the National Museum of the American Indian stands today was the site of a working-class neighborhood. People lived, shopped, and worked in this area. Initially a neighborhood of white immigrants and working-class people, by the 1890s most of the residents were African American. By that time, the area was home to a school and a branch of the YMCA that served local African Americans in the then-segregated city. The neighborhood was leveled in the 1930s as part of the McMillan plan for a new landscape on the Mall.