Swimmers and bathing beauties filled the swimming areas of the Tidal Basin after its construction out of the mudflats on the Potomac in the 1880s. In 1914, Congress voted to create an official beach on the Tidal Basin for white patrons.  African Americans swam nearby in a segregated area that never received funding or buildings. Facing increased criticism from black leaders and concerns that the water was polluted, Congress voted to ban swimming in the Tidal Basin in 1925. Swimming has never been allowed in the Reflecting Pool, but there were segregated, whites-only swimming pools near the Washington Monument during the late 1920s.

Starting in the 1880s, people enjoyed swimming in the Tidal Basin after it was carved out of mudflats on the Potomac. In 1914, the Washington office of Buildings and Grounds opened a formal, white-only bathing beach with changing rooms and a shelter on the southern shore of the Tidal Basin. 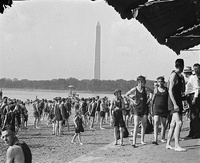 The white bathing beach at the Tidal Basin was a popular spot to swim, dance, and play during the hot summer months. In the 1920s, police measured women's bathing suits to ensure they were no more than 6 inches above the knee. Competitors gorged themselves during pie eating contests. Black residents swam at a spot across the basin where there were no official buildings or diving structures.

The Senate voted to close the white bathing beach in 1925, partly due to concerns about pollution and partly because of pressures from African American leaders to build a black bathing beach on the other side of the Tidal Basin. The House Committee on Appropriations, responsible for the budget of the District of Columbia, allocated and then repealed funds for a beach for African Americans. The buildings were demolished and the sandy area was landscaped with a variety of plantings to hide its previous life as a beach. 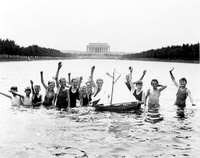 Swimming has never been permitted in the Reflecting Pool, but city children like this 1926 group enjoyed the cool waters anyway. There were very few public pools in Washington, DC, at the time.

Between the mid 1920s and 1935, city officials operated three small public pools on the Washington Monument Grounds. These whites-only pools were condemned and demolished in 1935.