The Mall stretches across 1,000 acres containing turf, flowers, trees, gardens, water features, monuments, and memorials that require care and attention. From the early 1800s until the 1930s, Congress oversaw maintenance on the Mall, while specific federal agencies were responsible for areas near their buildings. Beginning in 1933, the National Park Service assumed responsibilities for maintenance and interpretation of the Mall. Other federal entities, such as the Smithsonian Institution, continued caring for their buildings and grounds. National Park Service teams work alongside specialists and volunteers to maintain the Mall's grounds that see over 24 million visitors each year.

In the 1800s, Congress was officially in charge of the Mall grounds. Each federal agency located on the Mall was then responsible for maintaining the landscape around its buildings. In the 1850s, Secretary of the Smithsonian Joseph Henry expected Congress to give the Institution money for landscaping. Henry complained to Congress in 1856 they had not allocated funds for planning and maintaining the Smithsonian grounds, and the area near the Castle looked neglected. This photograph illustrated Henry’s concerns about the lack of an ordered landscape design fit for a national museum. 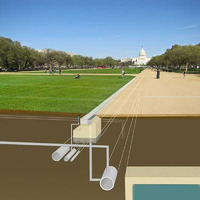 The open spaces of the Mall have always been popular with residents and tourists, but the traffic wears down the grass. To protect the lawns, the National Park Service began a major turf restoration project in 2012. The new lawns will include drought-resistant grass, soil that can withstand the Mall’s visitor traffic, and an irrigation and drainage system for collecting and recycling rain for watering the turf and greenery on the Mall. Other important elements of this project are new granite curbs and ramps that increase the overall accessibility of the grounds for all visitors.

While landscapers work on the grounds of the Mall, a special team of professional arborists care for its trees. Arborists working today care for trees which were planted in the first half of the 1900s, when Congress approved a number of changes to the landscape design of the Mall. At that time, most of the trees near the museums were replaced with American elms, and cherry trees were planted near the Tidal Basin. The arborists prune, water, and fertilize the trees, while also fighting insects and diseases that attack trunks and leaves.

Since the National Park Service assumed responsibility for the Mall in 1933, one of the biggest challenges is preserving the memorials and monuments. Preservation can be difficult because the structures live outside and are exposed to all types of weather conditions, including blizzards, tornadoes, and earthquakes. A special Park Service team works on the Mall to increase the longevity of the monuments and memorials. Here, one crew member cleans Lincoln’s statue at the Lincoln Memorial.

The Department of Argriculture is one of the federal agencies that has cared for spaces on the Mall since the late 1800s. During that time, it supported experimental gardens and greenhouses on the Mall. Today, the Department once again has a presence outside of its offices on the Mall grounds. In 2009, Agriculture employees started the People’s Garden in a former parking lot and volunteer their time to plant, tend, and harvest the garden‘s vegetables, fruits, and herbs. The produce is donated to local food pantries and soup kitchens.