In 1783 the Continental Congress approved a statute designed by Pierre L’Enfant showing George Washington as an army commander, riding a horse and wearing a laurel wreath. In 1791, L’Enfant’s design for Washington city placed the statue in direct line with the President's House and the houses of Congress. This was the first proposal to memorialize Washington, but it was not the last. In 1884, the Washington Monument opened after nearly 100 years of failed proposals and controversy.

In the 1790s, architect Benjamin Latrobe designed an Egyptian-style pyramid that would include large murals painted inside to honor Washington as the United States’ first president. Planning for a monument began during Washington’s lifetime, and was part of the original plan for the new capital city. Latrobe’s design was set aside, because there was not enought money to pay for monument construction.

With no monument in place by the 100th anniversary of Washington’s birth in 1832, Congress commissioned a statue of the first president by sculptor Horatio Greenough. He built "Enthroned Washington,” representing a bare-chested Washington seated in a toga, looking more like a God than a former president. Soon after it was installed inside the Capitol in 1841, the statue became extremely unpopular and was moved to the East Lawn two years later. In 1908, Congress moved the statue again to the Smithsonian’s National Museum. The search for an appropriate and popular monument to Washington continued. 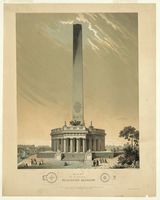 In 1836, the privately-funded Washington National Monument Society hosted a national competition seeking designs for a Washington Monument. Architect Robert Mills won with this design featuring a colonnade, equestrian statue, and central obelisk. Construction began in 1848, and the Monument Society raised funds by selling ceremonial stones. Construction stopped in 1856 when an anti-Catholic political wing objected to Pope Pius IX donating a stone. Congress pulled all support for the project until after the Civil War. 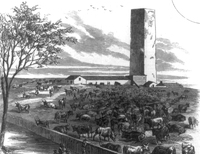 An incomplete Washington Monument sat on the Mall for over twenty years. In 1876 Congress voted to fund the remaining construction of the monument, under the supervision of the Army Corps of Engineers. Even with a new budget, Mills's original design could not remain intact. Under government supervision, the Washington National Monument Society quietly accepted new design ideas.

Architect M.P. Hapgood proposed this Gothic tower that incorporated the existing monument base, but was more decorative. The new designs from the 1870s reflected popular architecture from that time, rather than from the 1830s when Mills first designed the monument. Ultimately, Congress kept Mills’s plan to build a tall obelisk, but eliminated the rotunda and statue originally intended to sit at the base of the monument.