In 1867, 2 years after Lincoln's assassination, the Lincoln Monument Association formed to honor him with a memorial. Financial problems and political infighting prevented the memorial from becoming a possibility at that time. Over the next 40 years, many different designs for statues and elaborate memorials were proposed. By 1911, Congress stepped in and offered funding, created a an oversight committee, chose a design, and began construction of what became the Lincoln Memorial we know today. The Memorial finally opened in 1922. 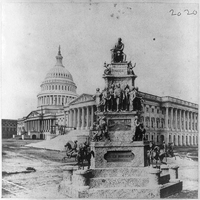 Almost immediately after Lincoln’s assassination, Americans began calling for a national monument to honor him. In 1867 the Lincoln Monument Association wanted this statue by sculptor Clark Mills to become Lincoln's memorial on the grounds of the US Capitol. The multi-tiered statue contains 36 bronze figures, including Lincoln seated at the top of the scenes related to war, writing the Emancipation Proclamation. Much like the Washington National Monument Society which came before it, the Association was plagued by political infighting and money troubles. This design was never completed.

In 1911, Congress decided that it was time to build a memorial to the 16th President. They appropriated funds, started a subcommittee, and tasked the Commission of Fine Arts with finding an artist and location for the memorial. The Commission considered several locations for a memorial far from the Mall including the Soldier's Home in northeast Washington where Lincoln drafted the Emancipation Proclamation. By choosing its current location, the Commission ensured that the Memorial held a prominent place on the Mall, at the opposite end from the Capitol.

Architect John Russell Pope submitted several proposals for the 1911 Lincoln Memorial design competition. This rejected design is a "ziggurat" that looks like a stepped pyramid built by ancient civiliations of the Middle East. This design featured 4 large statues at the base and a large bronze statue of Lincoln standing at the top of the pyramid.

Another design submitted by Pope featured a different type of pyramid. This monument's Mayan design featured an eternal flame burning at its peak in memory of Lincoln. Pope's pyramids were too flashy for the committee who did not want introduce new architectural style on the National Mall that might clash with the existing neoclassical buildings.

The committee chose this neo-classical design created by architect Henry Bacon. The memorial  features a temple with a statue of Lincoln, tributes to his famous speeches, and murals within the memorial's chamber. Once construction began in 1914, some adjustements were made to the design to create what you see today. The Lincoln Memorial was dedicated in 1922.